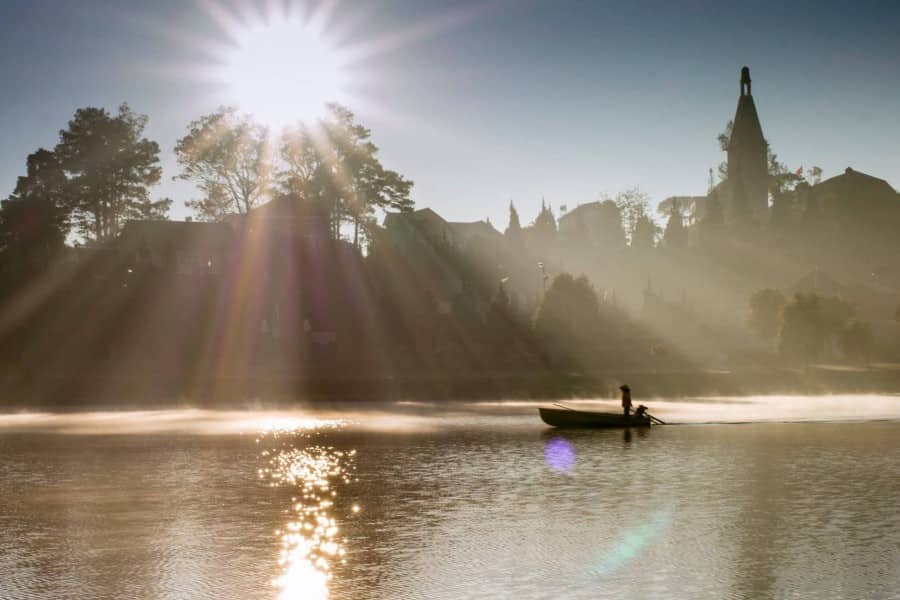 In 1922, according to the plan of restoring the city by the Minister P.Doumer, the civil engineer Lable had an artificial pool made, a dam built on the old valley and made a new lake with a French name“ Grand Lac ”. A year later, another dam was built down side but in 1932, a violent storm blew up the two dams, latter a bigger dam was built and it is still there to day (it was named after the first Vietnamese Manager, Mr. Pham Khac Ha). In 1953, according to Ngo Dinh Diem regime, some names in the South were Vietnamesalized and this lake had a new name: “ Xuan Huong lake” (it mean “send out scent in the spring). The lake has an area of 5.5 km and its average depth is 1.5 m, 25 ha wide, with a crescent-shaped crescent stretching over 2 km, passing through many tourist sites of Da Lat city such as City flower garden, Yersin Park, Cu Hill. According to history, Xuan Huong lake is the source of then name Da lat. This is the first sight in Lam Dong which was confirmed as a National Site in 1988. 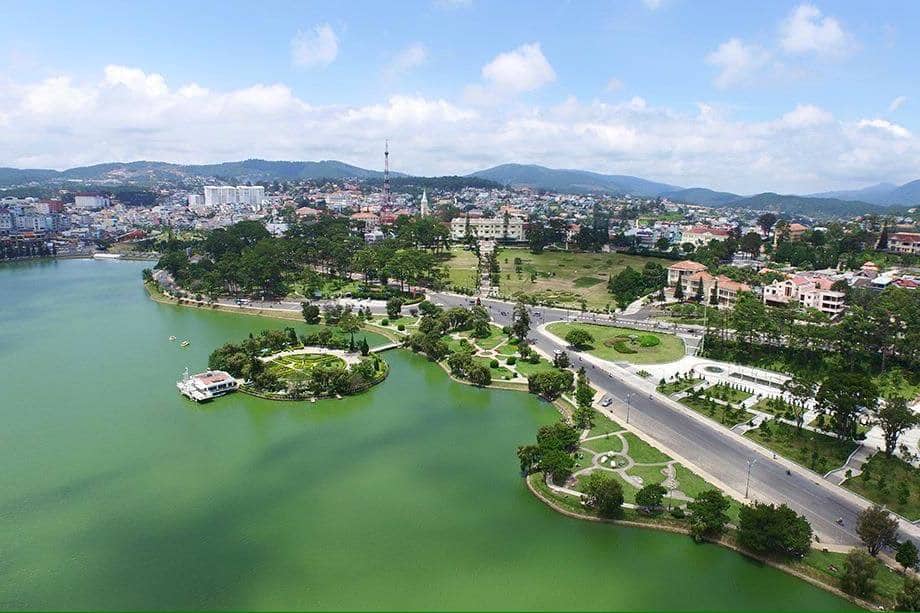 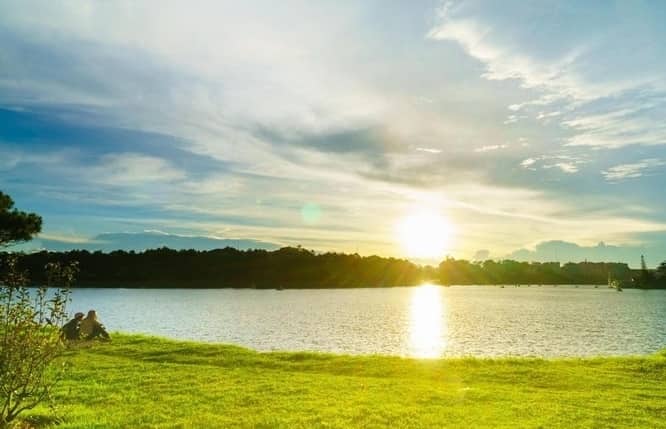 Around the lake, there are two kinds of trees which are considered to be the specialties of Dalat: The cherry trees and the willow trees.
From about Christmas time, cherry flowers blossom up around the lake so beautiful and romantic which reminds visitors of the spring in the North. 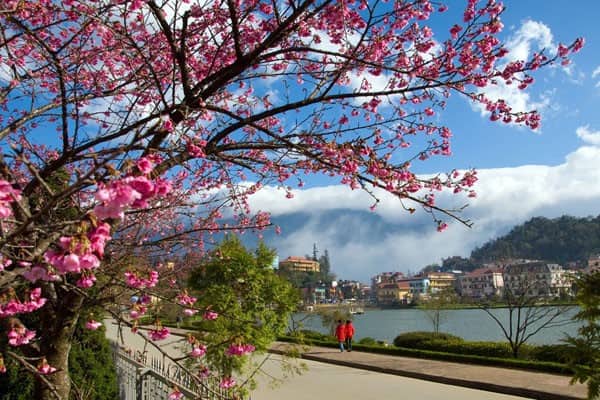 For many years, the race around Xuan Huong Lake has become an official race of the National bicycle race performed by Ho Chi Minh City T.V station every year and which has been always broadcast live. 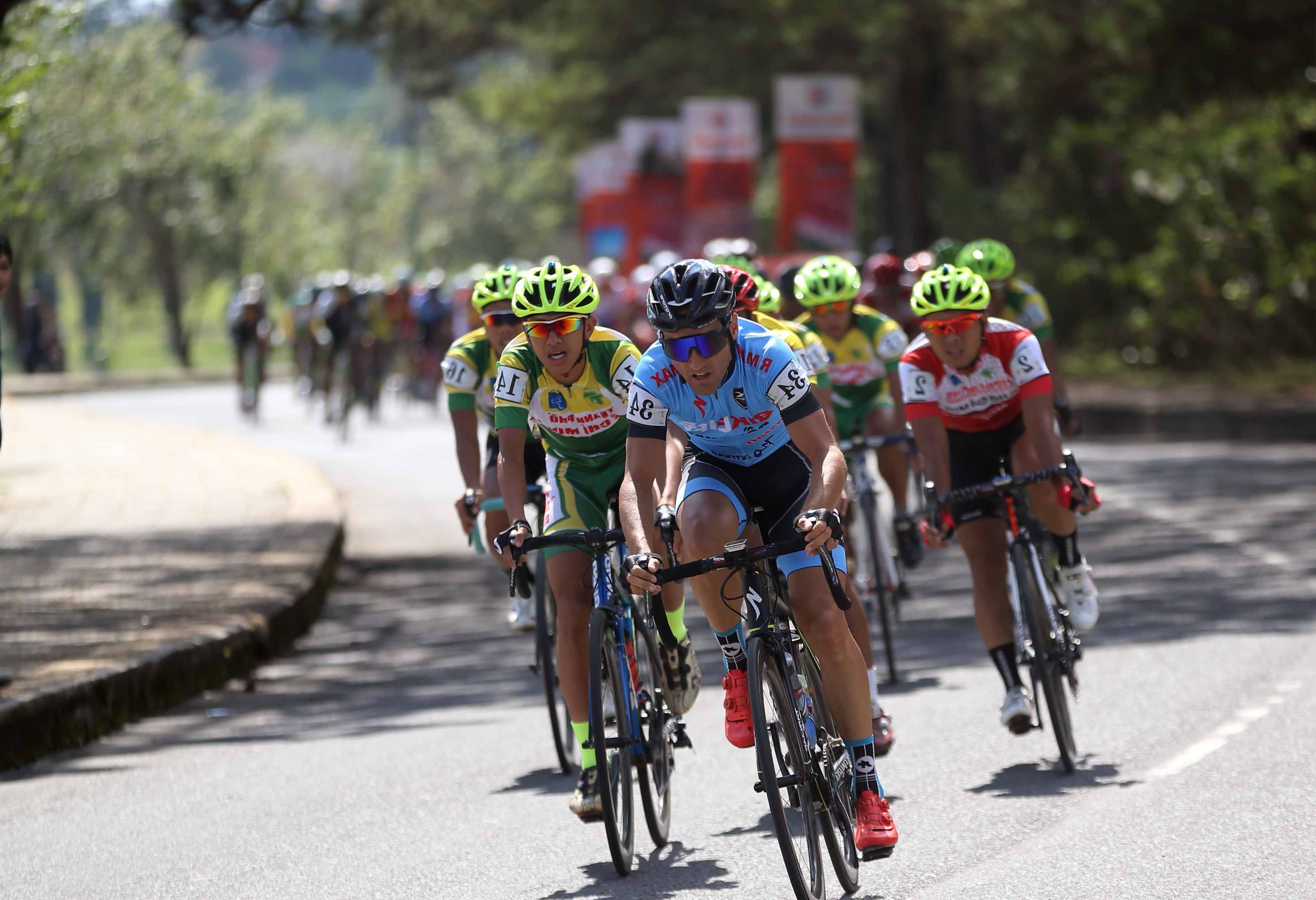 At Xuan Huong lake, some services such as water bicycle, ride a horse, ride a bicycle...for sighting. 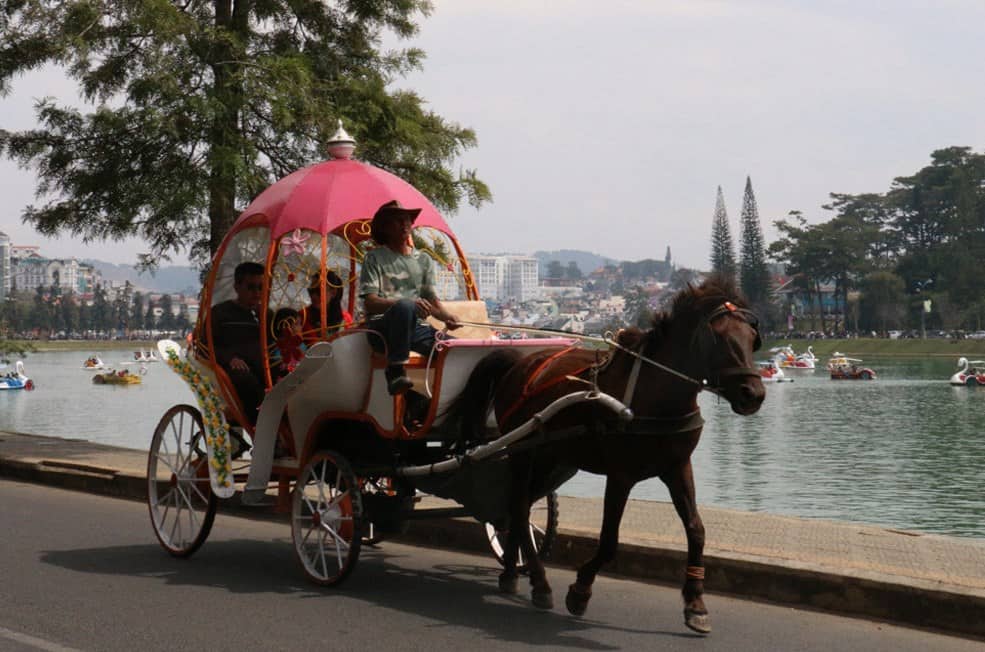 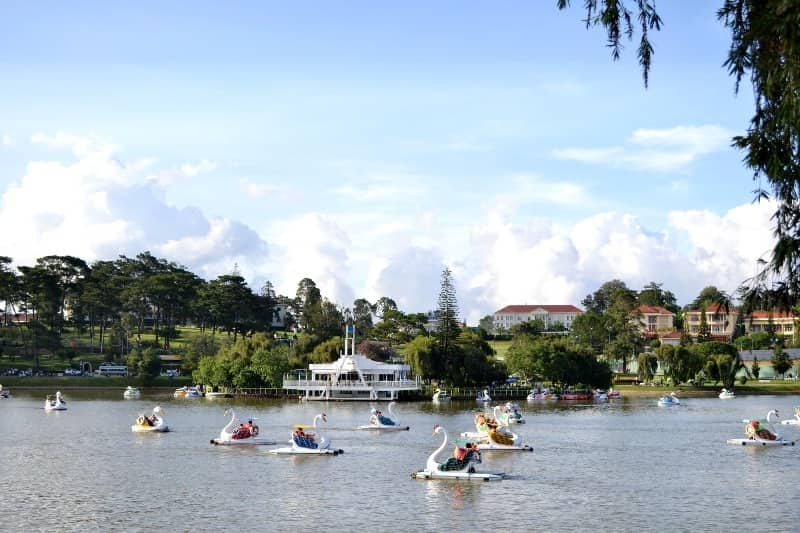 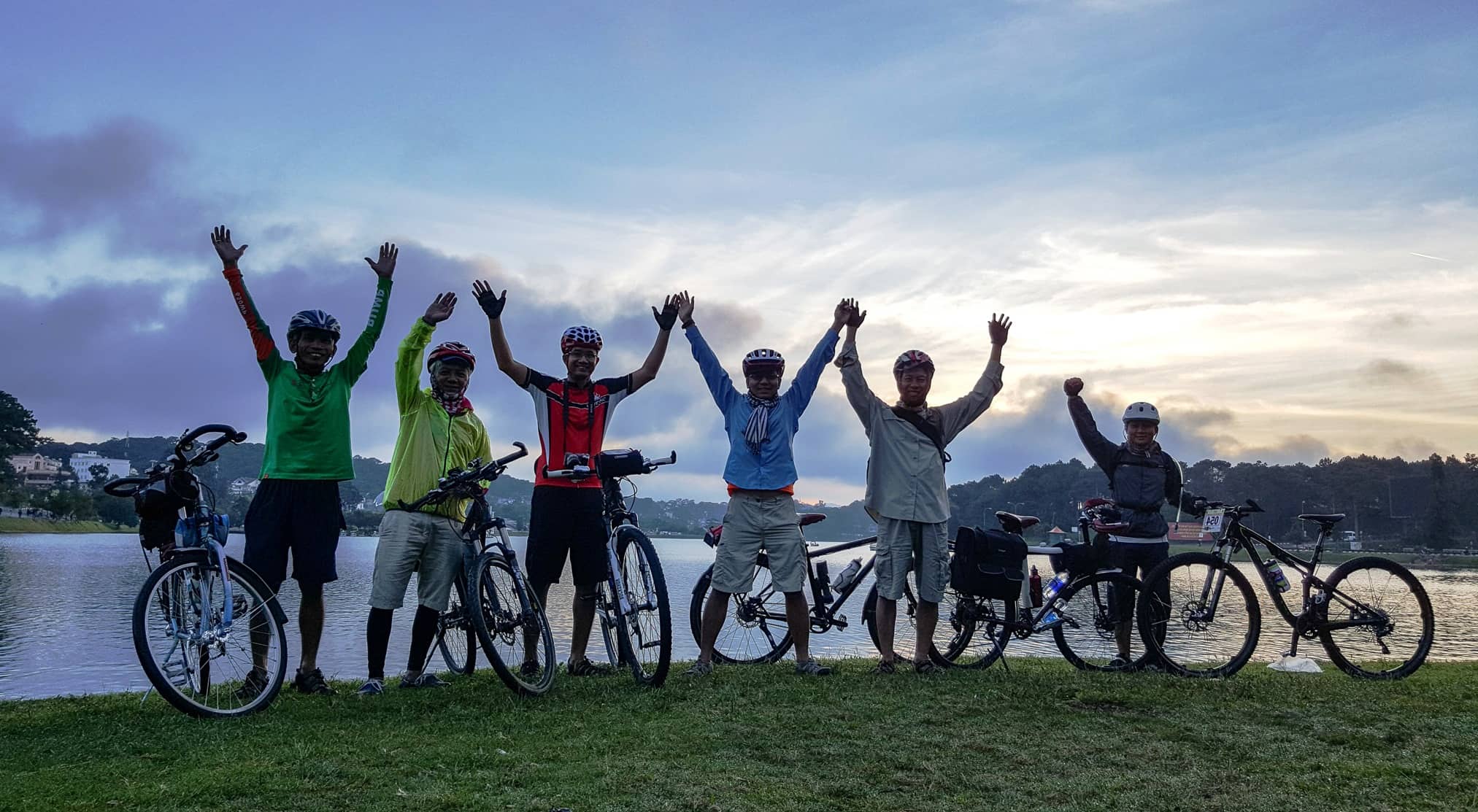 In the late afternoon, having a walk around the Xuan Huong Lake you will feel the coolness of a temperate climate and will relax. You can have a coffee in Thuy Ta Restaurant or Thanh Thuy restaurant to sight the sunset at here. It's so beautiful and magical. 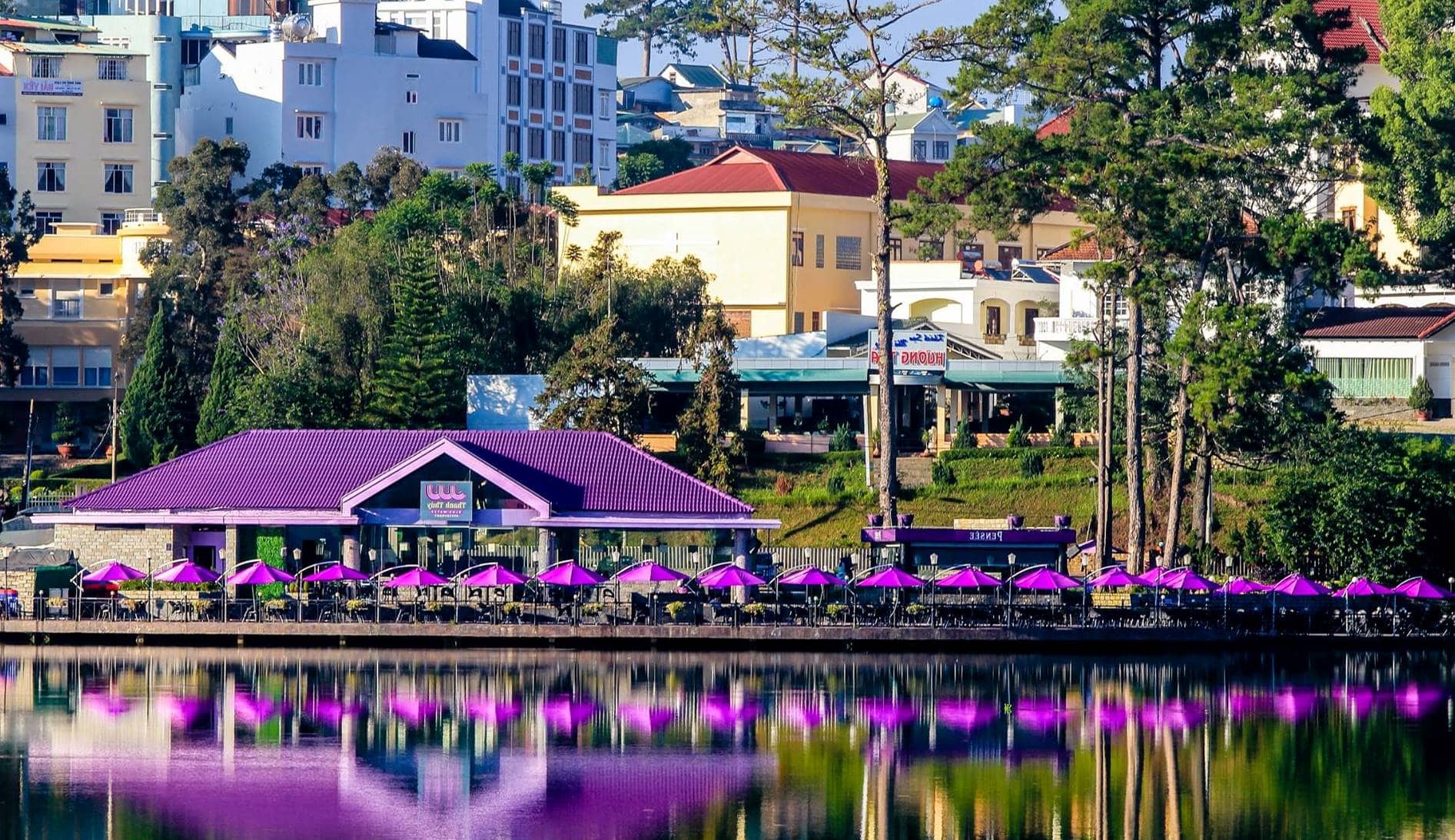 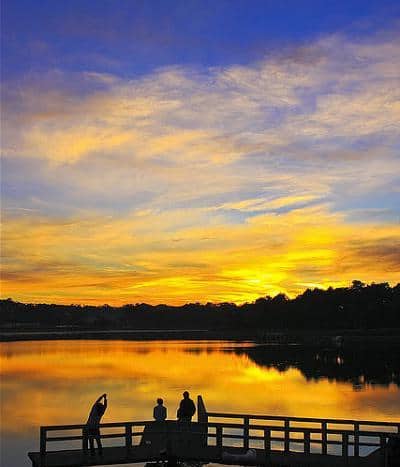 Xuan Huong lake is the heart of Dalat city, this place really is wonderful that you shouldn't miss it!

Xuan Huong lake Dalat as a poetic highlight between the center, adding to the charming look, charming city. Around the lake, there are pine forests and green grass, along with colorful flowers all year round.

With a circumference of 5km, a depth of 1.5m, the width of 38ha, the crescent moon is nearly 7km, passing through many attractive places such as central flower garden, Yersin Park, Cu Hill ... so many people describe the lake. Xuan Huong Da Lat as the heart of the city.

The beauty here is very romantic at two moments. Early in the morning, when the first rays of sun passed through the pinewood, the image of Xuan Huong Lake Da Lat was like a silver carpet, covered with mist. In the evening, the sunset dyed purple space, the lake surface turned into a giant sword, reflecting the red sun. It is easy to understand why the poet Han Mac Tu felt the poetry of Xuan Huong Da Lat: "Whoever quietly speaks no more / To hear under the water of the lake, To hear the shaking of the wind in the wind. interpretation of love.

For tourists to Dalat, the scenic Xuan Huong Lake seems indispensable. Tourists often stroll around the lake, then stop by the Thuy Ta, visit a different architecture has attached Xuan Huong Lake from the early childhood. A crystal-clear white house with wide raffles, prominent on the blue lake as a luxury yacht. This is also a nice cafe, private space, more melodious music, very suitable for just watching Xuan Huong Lake just sip the flavor of West Highlands cafe.

For more fun, you can join the swan boat ride, glide on the lake and watch Dalat from a very different angle. Or try a horse-drawn carriage ride, hear the whistle and nostalgic memories of the ancients. In the evening, rent a bicycle, walk slowly around the Xuan Huong Lake Da Lat at night under the light of love, stopping to enjoy the snack foods such as rice cake with a cup of hot soy milk in the air. cold...

In addition, from Noel to Tet, Mai Anh Dao flowers will bloom very beautiful lake. Xuan Huong Lake Da Lat is also the place to organize many cultural and tourism events of the city and Lam Dong. In particular, the "race around Xuan Huong Lake" has become the official lap of the national bicycle race schedule and is broadcast live. The restaurants, hotels near Xuan Huong Lake Da Lat are also selected by many tourists space here. 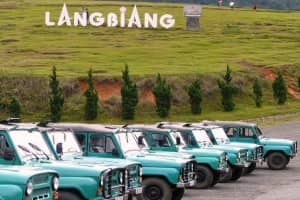 This is a place suitable for ethnographers, for the tourists who love the traditional culture to study the culture of the South Central Highlands and also for the people love adventurous, adventure. 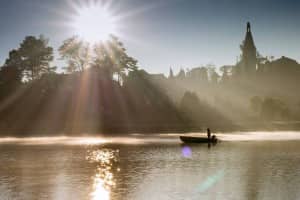 Xuan Huong lake is a green eye of Dalat city. located in the center, it bring the cool air and nature balance for the whole city 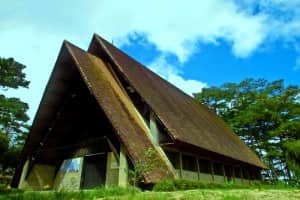 Camly church is one of the most beautiful church in Dalat. a combination of Still house and western architecture 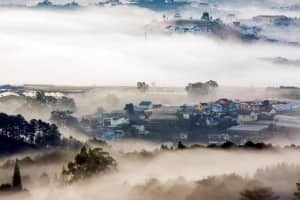 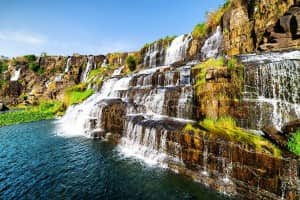 Pongour waterfall is a magnificent and nicest water fall of the south Vietnam. If you go to Dalat, this is an unmissable waterfall

Amazing view of the coffee plantation. Melinh coffee is a famous coffee where you feel very relaxed and enjoy the breeze