Lak lake: this is a legendary land which passionates a lot of visitors and it is also known as a symbol of a wonderful culture of the minorities in Daklak with the sound of a stone musical instrument, the sound of the H’Nong songs. Especially this is expressed by an old story telling from one generation to another. The story started when there was an argument between water and fire .They fought violently in 7 harvest times but neither won.

When they left, was a long drought, people didn’t have water to drink, fire to cook food. The drought lasted day after day and young men in tribes had to find water in the forest. Among the young men, there were 2 brothers named Y Lak and Y Lieng. Thier parents died, the villagers helped them to find water and finally with help of Yang (God) they found a Lo O tree and flow of water appeared with an eel.When the brought back the eel, the eel became bigger and bigger and became a hole, the larger the hole was, the more water there was and the villagers had to dig the pool himself.

The one day, a dragon flew over, saw that beautiful pool and wanted to occupy the pool and a violent fight happened which shook the space in 7 days. Finally, thanks to a helping hand of Y Lakand Y Lieng the dragon was killed, the eel was saved, the pool remained its greenness. The names of the two brothers were given to the lake, it was Lak Lake. 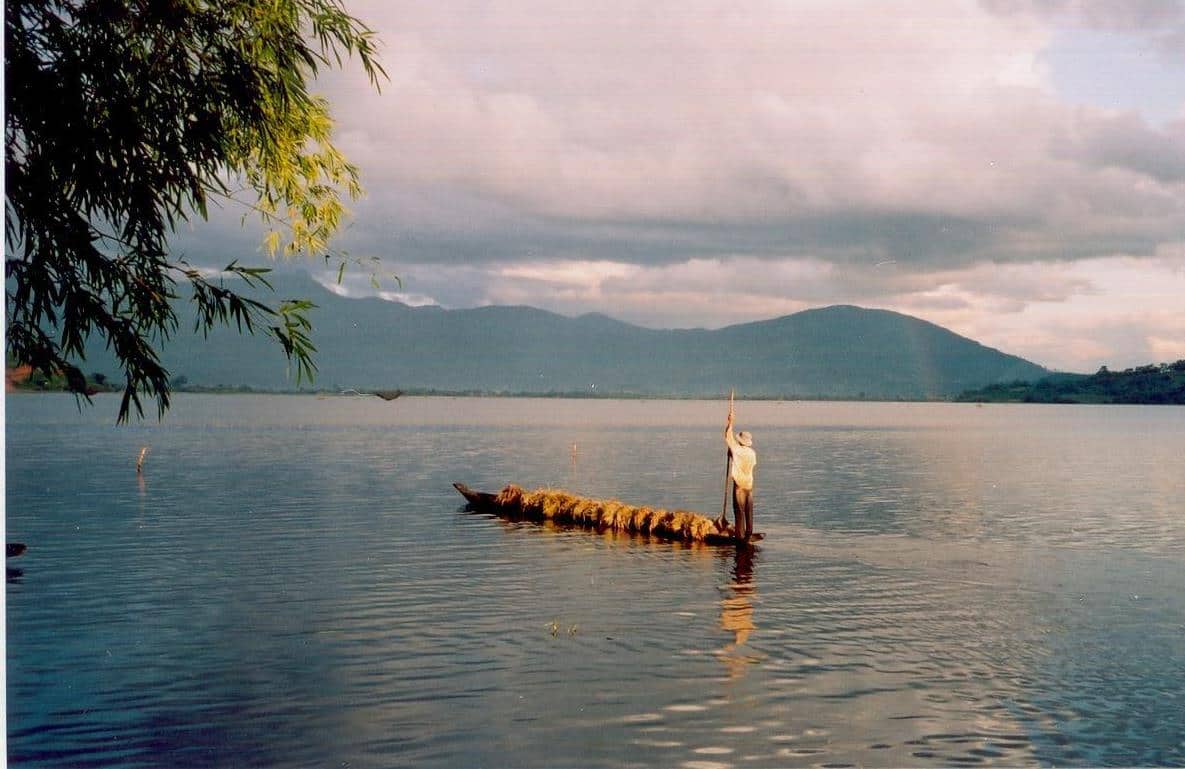 Jun tribes: It is beside Lak lake, jun tribes has a pure beauty of a western Highland village that looks like a mountainous girl. Here, there are a lot of bungalows in ancient traditional architecture of the West Highlanders which are very imposing and close hidden under old big trees, in these bungalows, there are H’Mong ladies working hard beside their silk weaving frame. Jun tribe has still kept some traditional cultural activities with the wonderful gong festivals, with the melodious dances, with the enjoyment of riding on elephant backs. 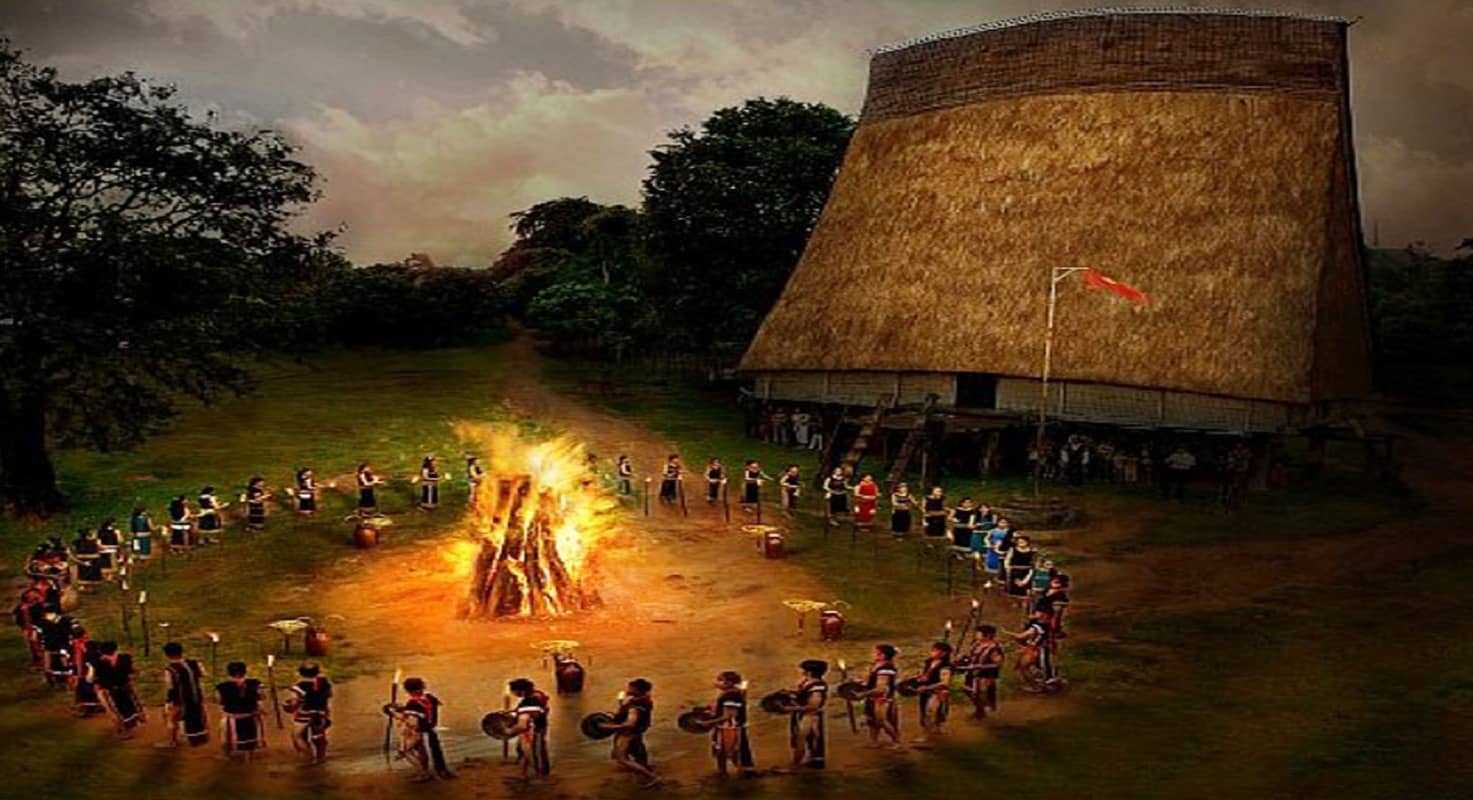 Lak Lake is the largest natural freshwater lake in Dak Lak province and the second largest in Vietnam after Ba Be Lake. Around the lake, there are large mountains covered by primitive forests. Jun village, a famous village of the M'nong people, located by the lake. Around the lake, there are historical structures such as the electrified Bao Dai emperor, the longhouse of the M'Nong.
Lac Lak is located on the Lien Son (Lac Thien) town of Lak District, next to the traffic road between Buon Ma Thuot and Da Lat, about 56 km south of Buon Ma Thuot City along Highway 27. About 10 km before entering Lac Thien town will see the lake on the right. The space of the historical, cultural and environmental forests of Lak lake covers the communes of Bong Krang, Yang Tao, Dak Lieng.
This lake is the largest of its size than Bien Ho (Gia Lai province). The indigenous peoples here also have a mythical deep bottomless lake or through the Lake. The lake is over 5 km², connected to the Krong Ana River. The lake is surrounded by high mountains, so the surface of the lake is always calm and has large natural forests with rich flora and fauna. According to lore legend was created by the heroic ethnic M'Nong.
Ho Lake is home to Jun and M'Lieng, the typical villages of the M'Nong ethnic group, which are organized as an important tourist site in Dak Lak such as preserved villages, cultural exhibitions Indigenous people in the Central Highlands. There are also many traditional houses with roofs of bamboo trees and elephants with more than 10 elephants. Visitors come here not only to visit Lak lake but also to enjoy the Tay Nguyen culture such as fire dance, seasonal dance, gong singing, t'rung, kong, rock, elephant riding or Dugout canoe on the lake or cross the lake.
The specialty of Lak lake is the sliced fish, which is a special kind of fish that makes it very soft and fragrant.
On a hill next to the lake, there is also a large resort of Dak Lak Tourism Investment Company to exploit.
Former Emperor Bao Dai's former resort was located by the lake, on the hilltop behind the town of Lien Son. This is where King Bao Dai often visit, hunting, resting every occasion to Dak Lak. The house is located on the top of a hill with a very beautiful view covering almost the surface of Lak lake was built the same year with Khai Doan Pagoda and was personally Nam Phuong Queen is responsible for managing the construction investment.
Lake space, vestiges, and surrounding forests have been identified as historical and cultural forests of Lak Lake (a special-use forest) since 1995 with a total area of 12,299 hectares. With the program of environmental protection, tourism development to protect the highland forest ecosystems and grasslands, conservation of wildlife species, especially endemic species, and Rare scientific research, environmental education, ecotourism development ... Contributing to local socio-economic development and watershed protection to protect Lak lake and Krong Ana river. Here, 548 species of plants belonging to 118 families, 132 species of birds, 61 species of mammals, 43 species of amphibian-reptiles, 43 species of fish, shrimp, crab, and snails have been discovered.
Considered an important link in the Buon Ma Thuot tours, Lak lake is also a place to preserve the unique cultural values of the M "indigenous farm.
Lak Lake is home to Jun and the local market, typical villages of the MNong. These two villages are organized as an important tourist destination as the preserved villages, introducing ethnic cultures of the Central Highlands. There are also many traditional houses with roofs of bamboo grass. Visitors can also enjoy the Tay Nguyen culture such as fire dance, seasonal dance, gong singing, rock music, or canoeing on the lake.

Come to Jun, look at the stilt houses in the traditional architecture of the Central Highlands nestled under the shade of green trees, watching the village girls hardworking industrious brocade loom brocade ... Tourists will be like I was back in time with a peaceful scene, so poetic legendary characters have been imprinted on the old school songs.

Despite the many changes of history, Jun Village still reserves and promote the beauty of traditional culture, the traditional customs of the ancestors. The lifestyle and activities of ethnic minorities in Jun have a unique character that has been shaped hundreds of years ago.

Go to Jun, tourists will be riding elephants sightseeing mountain, village, lake surreal surging waves. If one stays in Jun, what is more, poetic when tourists are sitting on the floor of the house floor, watching the beautiful moonlight in the evening, the wind from Lake Lak to bring the cold meat. Meet the people on the wine jar need, visitors heard the village elders told about the legend, the legend of this land in wild roses. The feeling of ecstasy, lightheaded by drunken men need to bring visitors to sleep quietly from time to time do not know.

Another great pleasure when coming to this place is that you can sail on Lak lake, enjoy Lam rice and specialties of Lak lake such as fish, eel, snails and many dishes of a wild flavor of copper. countryside.

If you go to Jun in the festive season, visitors will be immersed in the air jubilantly by the echoes of the gong, the lyrics of traditional lyrical and romantic lyrics.

Jun is an impressive tourist destination for those who want to explore, explore the cultural beauty of the traditional village of Tay Nguyen. Please visit the Jun once to have a lot of interesting things are waiting for ...