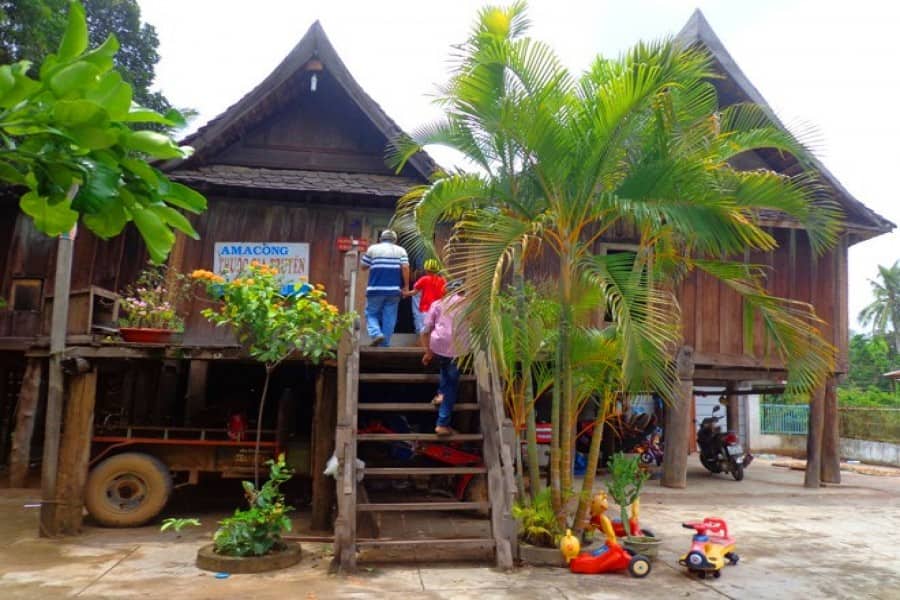 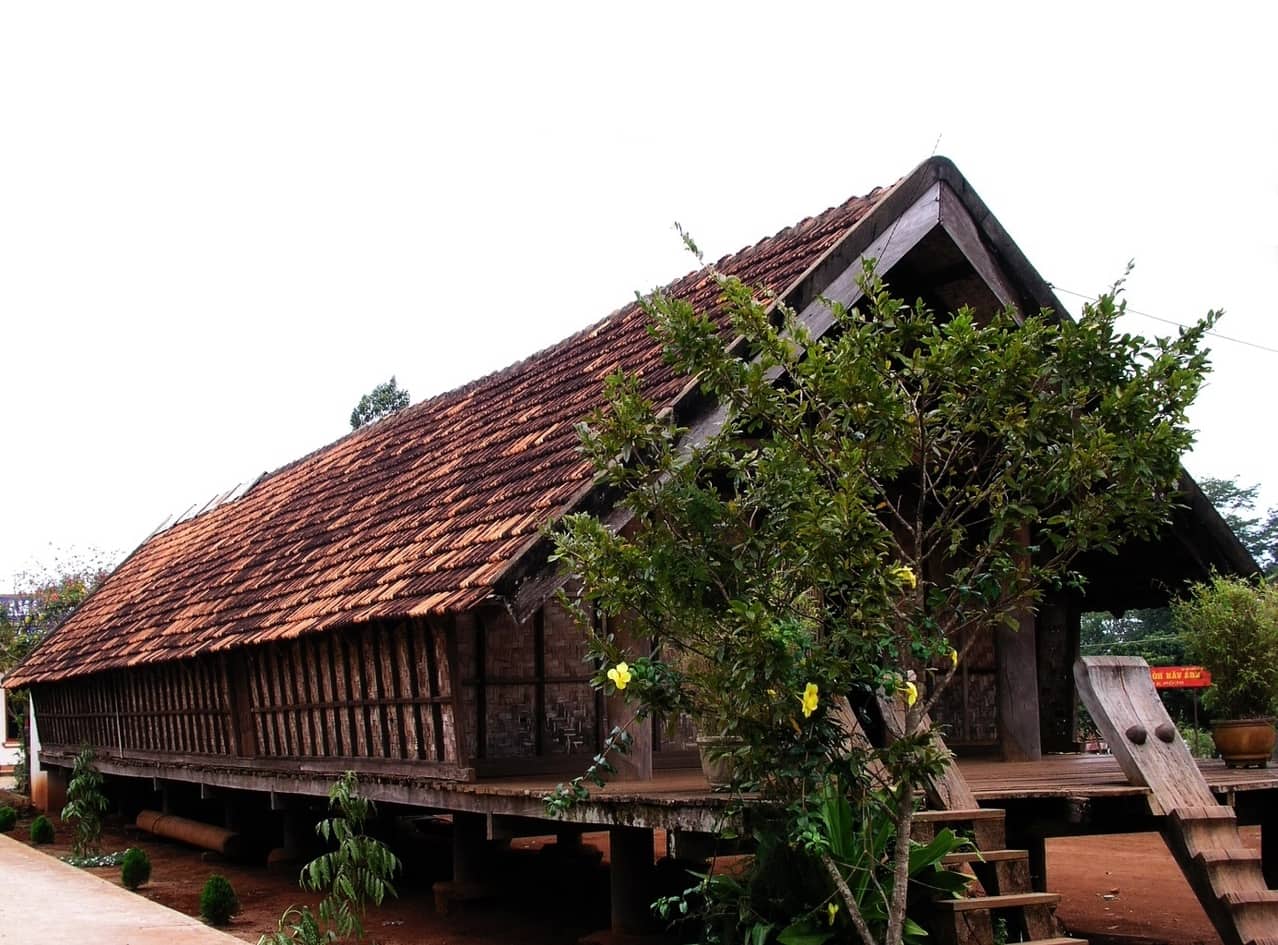 The name Buon Ma Thuot now is called after the name of the chief of an Ede tribe: Ama Y Tuoc. At the end of the 19th century and at the beginning of the 20th century this tribe was a powerful tribe of the Edes when the Frenchmen first stepped on this plateau they were refused by the tribes: Ama Y Thuot called all of his people for the resistance struggle against the French rules. Then in 1904, the French colonialists accomplished their pacification and they officially established Daklak province and moved their ruling offices from Don tribe to Ama Y Thuot’s land.The name Buon Ma Thuot (or Buon Me Thuot) appeared then the house of the old chief of the tribe was on Ama Khe street in Ko Sia tribe, Buon Ma Thuot. Now it is taken care by the 5 sisters H’rui, Kon Klor Nui, Ma Xuan, H’m’lo’, Hwu, Y But who are the 4th off springs Ama Y Thuot. The house is now down graded Its back is also sold. The inside old furniture was a k’pan bench 30 m long made of oak tree wood, 3 wooden bed, 2 big drums left by Ama Y Thuot himself. 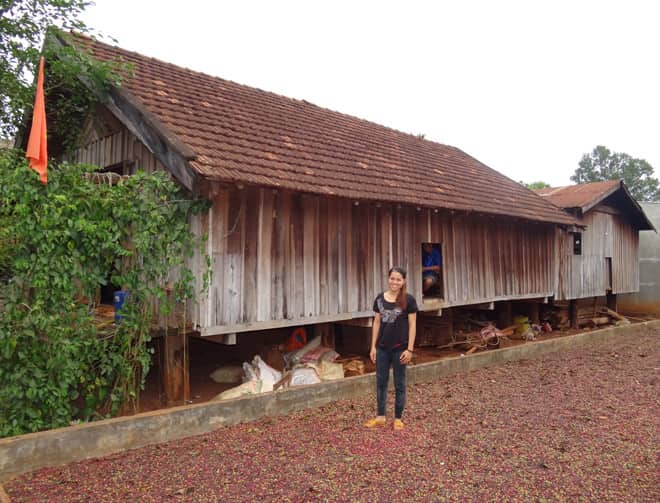 The stilt houses made of rough materials such as wood, bamboo, paintings ... are firmly anchored alongside the solid concrete houses. It is easy to see when you come to the villages of E De ethnic group.

- Long house of Ede people has the structure of low floor, usually from 15m to more than 100m depending on family or many people.

- It is a large house of many generations living together as a great family and is characteristic of the descent of the Ede deity.

- E De people have no Rong house or Guol house (*) as other ethnic groups in the Central Highlands, the common house of the village is also a traditional house but larger and more majestic.

These unique houses are called long houses, an interesting custom and also the traditional cultural beauty of the Ede ethnic group.

Ede people have traditionally built houses in the north-south direction and the traditional village of E De is arranged in the East-West direction. The materials used to build the house are wood, bamboo, paintings ...

There are legends about this unique feature of the Ede: "long house with the sound of the gong because standing at the head of the gong house, the end of the house only heard very little, out is lost forever, no longer hear half".

Exterior: Stilt house depicts the characteristics, properties, and uses of two traditional stairs (male and female); front and rear doors, front yard and rear yard. Ede's stairs are hand-carved and decorated with two flowers (representing the Ede faithfulness) and a missing moon. In addition, each end of the house has a floor courtyard: the floor courtyard at the main door is called the guest house. Want to get into the yard right across the floor. The better the house, the wider the yard, spacious.

The interior is divided into two main sections as follows:

+ Gak Ok: is considered as the living room and is used for all activities of the family and family such as meeting, worshiping, gong.

The walls and floors are crushed with banana; Roof grass is very thick, over 20cm, usually only once and used permanently. The roof is about 4 - 5 m from the floor. When building new houses, the Ede never re-used the old house wood that often burned, but today this custom only exists in the deep forest near where it is easy to find wood.

All columns and trims are often trimmed, decorated with pictures of animals such as elephants, turtles, lizards ... similar stairs, these decorations are always hand-carved in the traditional way.

+ Adú: is a place of living (sleeping) of the couple and their family members. The interior and interior of the home are also divided into East and West.

The figure of animals carved in the house of the Ede.

Westside is the fireplace for the whole family (in front of the host room), the private kitchens of the couples (in front of each door) and household items.

The rice paddies of the family for the last stay, separated from the previous space but smaller and shaped like a square.

The horizontal, thunderstick always adhere to the principle of completely hand-cut, from the long intact wood can reach over ten meters. In particular, count them, we can know how many times the house has been extended. Prolonged periods are usually when there is a female member of the family who builds a home for the matriarchal Ede, whose son will marry at his wife's home and have no authority.

Long house with values, nuances bearing the human meaning of traditional culture was the pride of the Ede people. The belief and matriarchal regime of the Ede ethnic group through the longhouses have survived well with time.

Most of all, long houses is a cultural feature typical of the ethnic minorities in Vietnam. It has contributed significantly to the diversity of the Vietnamese culture.