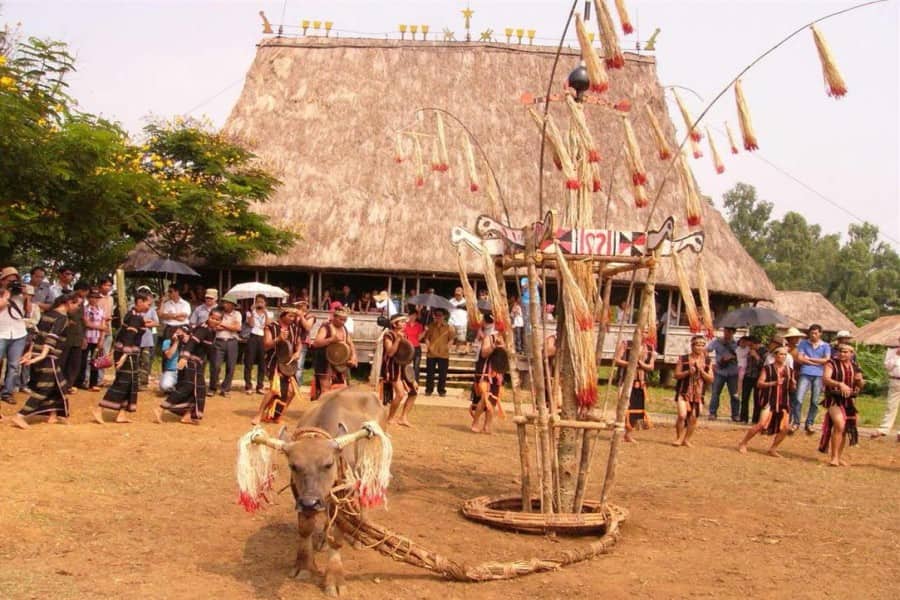 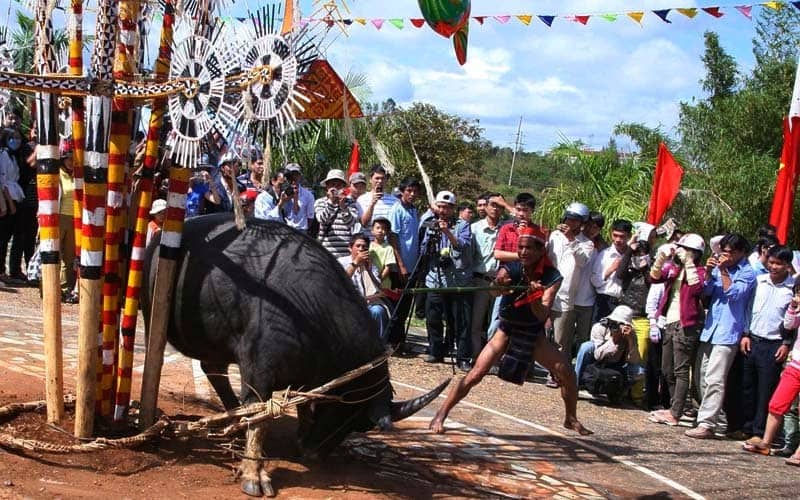 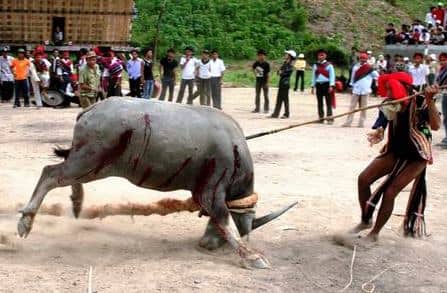 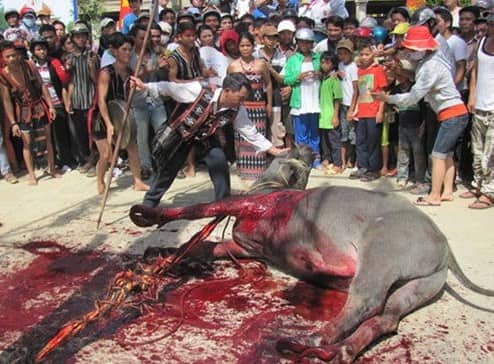 This old custom has been kept till now. Every year the Bana and the Gia Lai organize the buffalo killing festival once in their main Bungalow. The villages play to pay for the expenses together. People tie a buffalo to a tree near the bungalow and the oldest man of the village is the chief of the ceremony of praying Giang and he stands near the tie Buffalo.The young man wears Lion- clothes, young ladies wear skirts, all villages are well- dressed and stand around. When the old men have finished praying, gongs sound with shouts of people make the Buffalo scared and when the buffalo had tired the killing Buffalo festival begins. A strong young man with a long sword hits into the buffalo’s heart and this chosen man is an honor because it symbolizes the bravery, the strength of men. When the buffalo is killed, people hit its legs until it collapses. The meat of the buffalo is cut at the place after it is offered to the god, it is shared among the people in the bungalow and the rest is brought to other villages. People cook the meat on an open fire and eat it, drink “Can Wine”, dance overnight until exhausted.Men and women can be so happy that they sleep beside the fire in the bungalow. 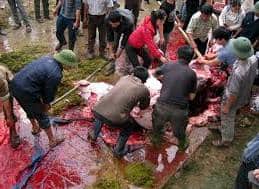 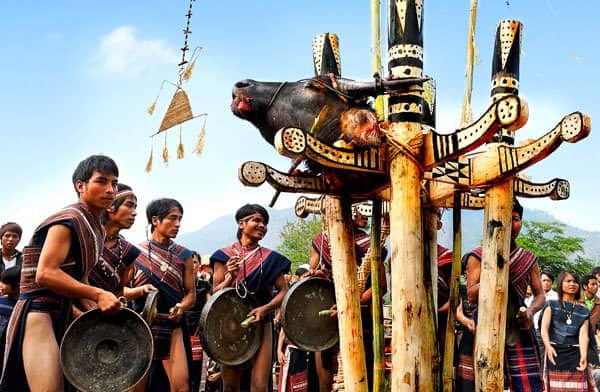 Kăhkapơ Festival is also known as Buffalo Crucifixion. For ethnic minorities in the Central Highlands, buffalo is a symbol of prosperity and strength in the community. Therefore, buffaloes are often used by the ethnic people as a kind of sacrifice or for exchanging with other precious objects, such as gongs, jars, drums and even elephants.
In order to sacrifice, ethnic people have a sacrifice buffalo. And buffalo killing is the most solemn of all the ceremonies of the Highlands. Buffalo festivals are usually held on occasions such as celebrating the victory, the feast, the peace offering, the inauguration of the village house, the pride of the community, the confidence of the community, or even the banishment of the villagers. The gods come to harass the villagers like natural calamities, epidemics ... However, many rich families also hold buffalo festivals to flaunt their power and enhance prestige in the community. But even at the family, family or village level, buffalo buffalo festival is always a special cultural activity, it upholds the spirit of the community of ethnic minorities in which gongs are played. an indispensable role.

In principle, buffalo festivals are usually held at the village grounds, during the festive season (also known as the month of month - month of rest), which occurs every year after harvest is completed. And festivals are usually prepared from the previous months ...
On the first day of the festival, the sound of gongs, usually gongs, emerges to invite and receive the spirit as well as the participants and complete the preparations for the festival. During this time, gongs are constantly emerging to stir up air.
As early as the next morning, all participants were present and gathered around the tree. After a few spells, the village elders give out a male buffalo and tie it to the tree with a solid rope made of bark. The gong is now stopped to give the village headman, the ceremony leader, a few words. Then gongs continue to emerge at a faster pace and more urgent for young men and women to dance together to the music.
During the day and night, everyone will dance in gong. There are also activities of competing in wrestling, whipping ... to compete for the talismans offered by the village elders. And especially the warriors who danced played the fight and won to inspire the courage in the hearts of everyone involved. All activities are performed around the tree if the buffalo - the sacrifice was tied.
On the afternoon of the third day, a young, well-knit, well-knuckled man approached the animal while dancing to the tune. The sacred moment comes, the young man will kill the animal by spitting the spear at the side, through the heart.
Buffalo after slaughter will be cut to treat the participants. The head of the buffalo is cut off, intact and placed solemnly on the tree if given to the god. If buffalo meat is not enough, people also kill more chicken so that everyone can eat and drink. The ceremony continued until the next morning with the music of gongs and wine. People eat meat and drink alcohol. Traditional dishes are well prepared and eaten by the echoes of gongs. The festival is a culture of Tay Nguyen ethnic minority people expressing the national spirit and unity of all members of the community.