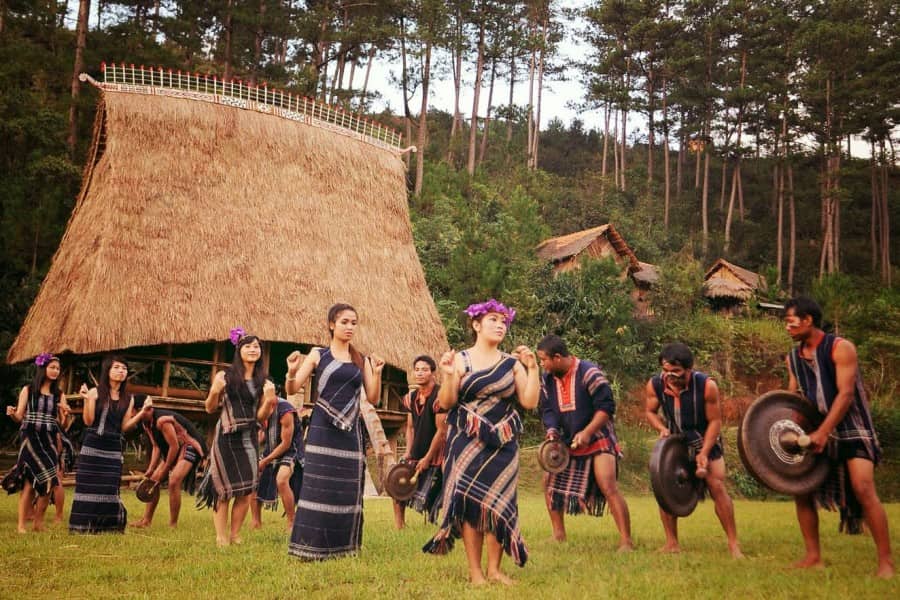 It is in Buon Don district, 40 km from Buon Ma Thuot in the West, Bon (or Buon)is a Laotian word of Ede’s word which means island, translated in an island village- this is an island village located in the middle of the three branches of the river Se Re Pok.

This place is next to the border of Laos and Cambodia, so many centuries ago, this was the region where trading developed on rivers and on land. This characteristic created a relationship between cultures of the Latian, the Hmong, the Ede, the Khome and the Giarai.
Being on this trade wat, people could learn how to hunt and to tame Elephant from Lao by a Laotian Vietnamese named Khunjunop. Khunjunop was called ling of Elephant Hunting (awarded by the king of) Around the beginning of the 19th century to the beginning of the 20th century, Don tribe was the only place to export Elephants and sell them to other places in the country and it was the trading center of the elephant of all Indo-china. History has said: From 1899 to 1908 this place sold 161 tamed elephants.The French government had taken taxes to 34.279 francs. Most of the elephants were sold in 1907: 56 ones. In the most prosperous period, people could catch and tame about 50 elephant/year.At the end of 19th century, when the French first came to Daklak they chose Don tribe as the place for their administrative offices and later until 1904 the moved to Buon Ma Thuot.
Coming to Don tribe sights visitors will be introduced and discovered about hunting work and taming wild elephant work. Visitors can go on elephant backs around the village or across Se Re Pok river into the old forest in order to understand the cultural way of life of the E Des, the Hmongs, the Laotian, the Khomes, the Giarai...

Every year on March 26th or on the celebration day of Buon Ma Thuot there were fascinating elephant racing festivals.

At the sight, you can enjoy rice cooked in bamboo tubes and wine, grilled meat. Visitors can go on foot or on elephant back to visit the graveyard of the king of elephant hunting which is 2 km away from the center of the site and visit a one-hundred-year-old bungalow 200 m from there.

Buon Don is beautiful not only because of the majestic landscape but also beautiful in ancient culture. The records indicate that Buon Don, according to the call of the Ede and M'nong, or Ban Don, in the Lao dialect, means "Island Village". The name may have been associated with a particular geographic location, and also because it was a village built on a mudflat (floating island) of the Serepok river. Since the end of the 19th century, when the road was still underdeveloped, the Serepok river was an important waterway of the region. And Buon Don from that day has become a "trading port", where exchanges, trade, exchange of goods between the Lao, Cambodian and indigenous people. From that exchange, the cultural and indigenous cultures and cultures of the Lao and Cambodian ethnic groups have been reconciled with the many ethnic groups living together: Ede, M'nong, Gia Rai, Thai people, then Kinh people and some ethnic groups in the north to establish ...

It is also said that, for a long time, Buon Don has been famous for hunting and domesticating elephants. The mighty N'Thu K'Nul has hunted hundreds of elephants and donated a royal white elephant to Thailand. The enthralling Khunjunop (the king of elephant hunting) gave him the title. After his death, the villagers built his tomb with a combination of two types of M'nong-Laos architecture to express gratitude to the deceased late chief. So far, the seal of the elephant hunting elephant is still present in the present life through the story of the people of Buon Don. Following the successes of the Khunjunop leader, Ama Kong's grandson has written his own stories: a talented hunter (elephant hunter), gifted by King Bao Dai to the precious sword. In particular, Ama Kong's remedies are combined from leaves, stems, and roots of forest trees that have become a special gift to visitors.

Many guests said that to Dak Lak without a trip to Buon Don is considered not to Dak Lak; It can be seen that Buon Don tourist site has a very important place in the scenic spots of Dak Lak province.

Coming to the Buon Don tourist area, it is easy to see large elephants wandering under the supervision of the administrator. It is strange to have a picnic with the Buon Don elephant to visit the life of the village, walking in the river and wandering into Yok Don National Park contains many interesting things.

In addition to elephants, Buon Don Resort also has a unique boat ride on the scenic Serepok river - a rare river in Vietnam that flows back to the west. And cannot ignore the feeling of swinging when traveling on the suspension bridge Buon Don, made of bamboo, forest and reinforced with iron. Suspended bridge across the river, in the middle of the old shade, is shady, looming the ancient bunch of roots in the scene of the charming.

In the Buon Don tourist area, you can learn about the cultural life, customs and activities of many ethnic groups, listen to the history of Buon Don, the art of hunting and domesticating elephants, visiting the house The centuries-old storeroom also preserves many of the traditional relics, visit the architectural grave of King Khunjunop.

Buon Don tourism is good, that is when the night down, the campfire flickering with jars of alcohol to drink drunk, listen to folk song Early, tear ... passionately, Dinh Nam and the same steps in the sound of the gong of the gong will make you feel more affection, Tay Nguyen.

* Price of Buon Don tourist resort: 40,000 VND / adult (free children under 1m3)
- Elephant ride in Buon Don: 70,000 VND / person (According to Buon Don travel experience, when crowded with elephants here, they have to work too hard, so instead of riding elephants, experience - for elephants eat under supervision. close of the monastery). In the near future, the elephant riding service in our country will have to abandon and turn to elephant watching, feeding, watching elephants perform ...