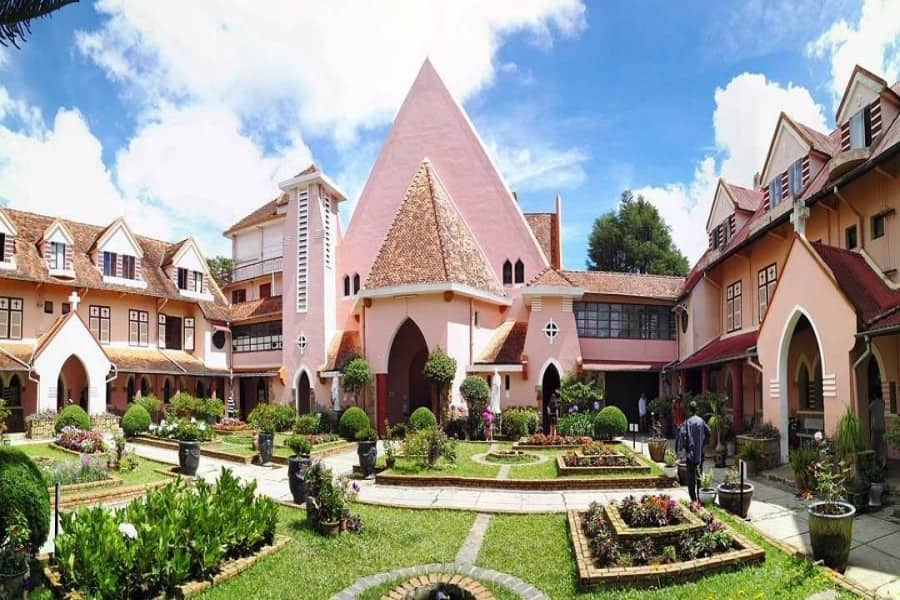 This church is also called The Cherry church because formerly there were a lot of cherry trees at this place. From a chapel of the nuns of Altruism, in 1943, the church was built with a more special architecture than any other churches. 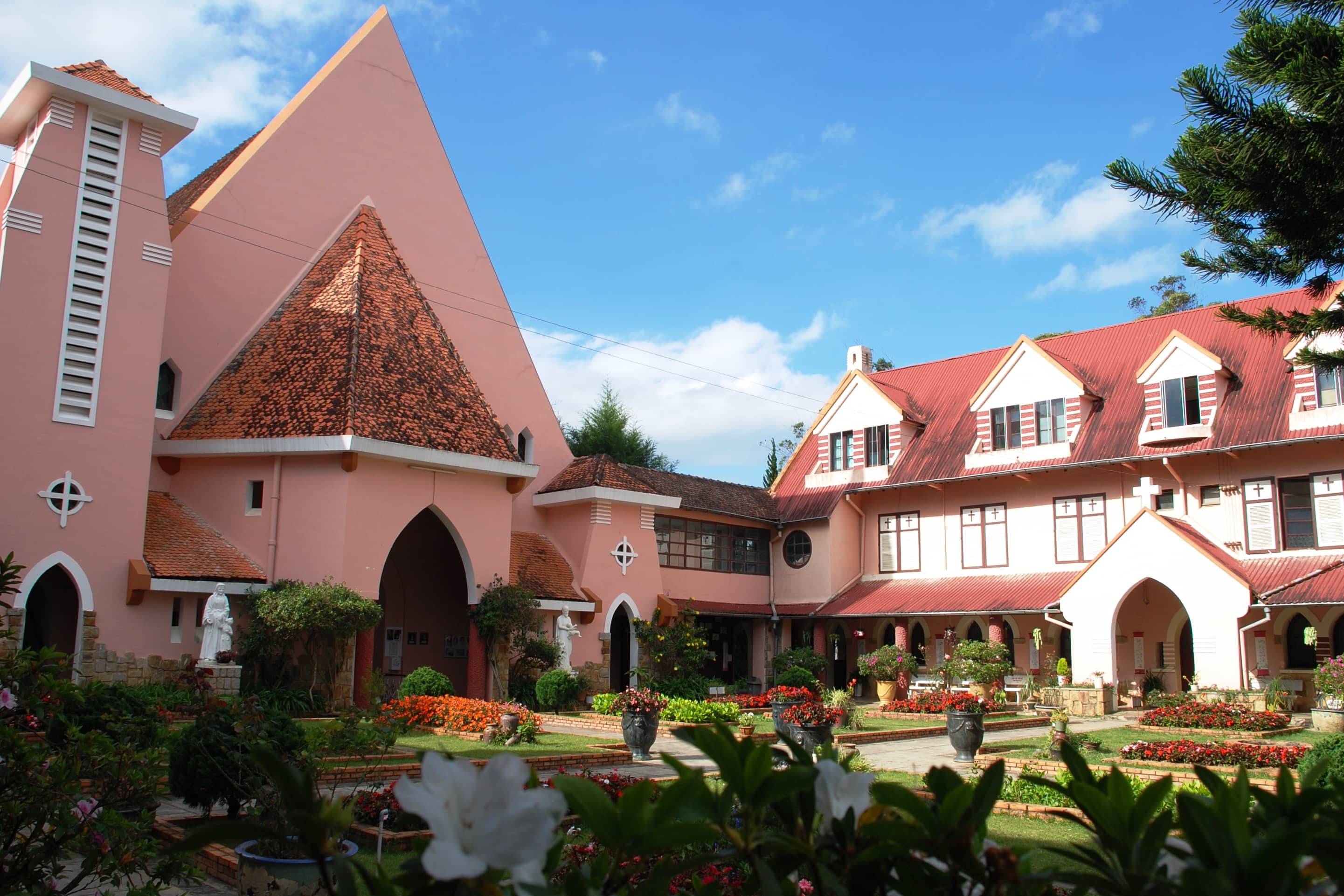 The church still has the statue of St Marry, 3 m high, 1 ton in weight, which was a present from the Indochinese governor’s wife, Mrs. Decoux. This is also the place where she was buried- behind the church. She was the sponsor of the Church and she was buried here according to her will. 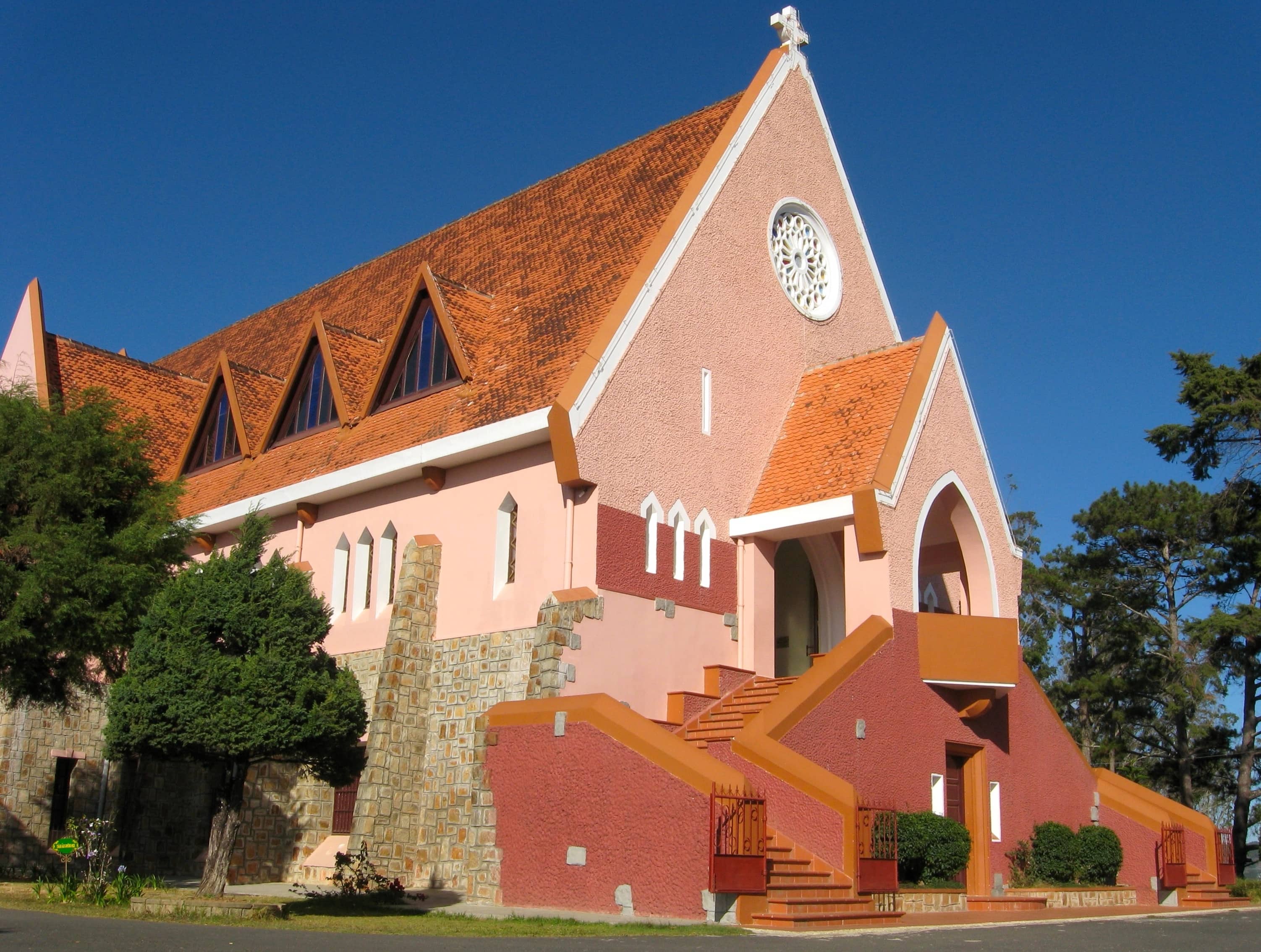 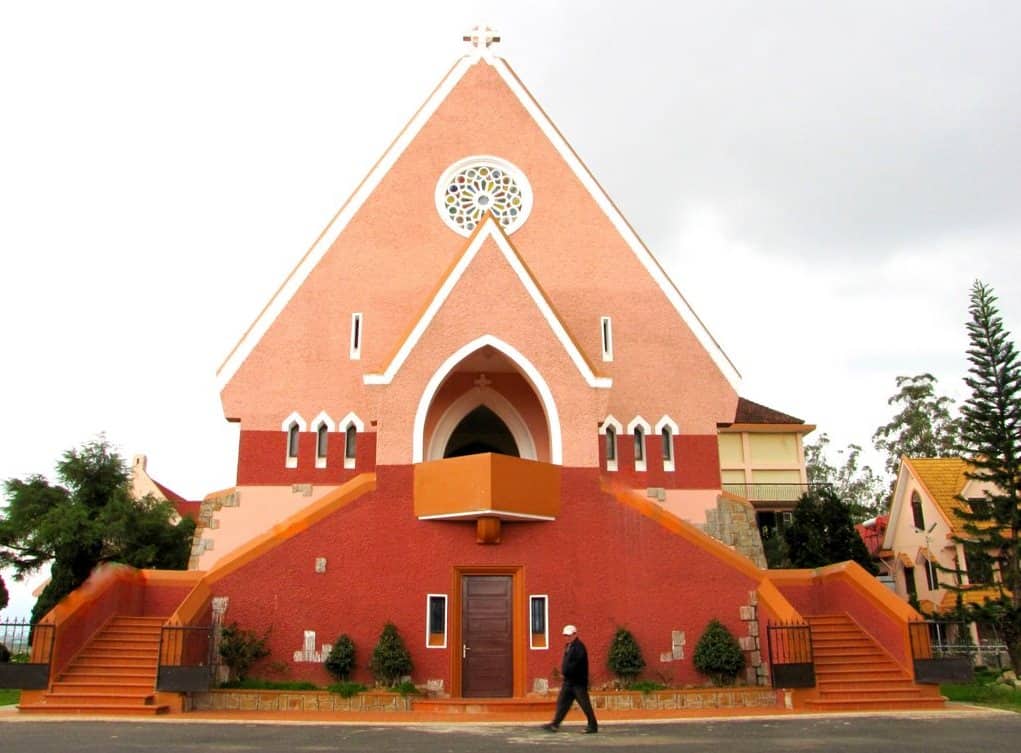 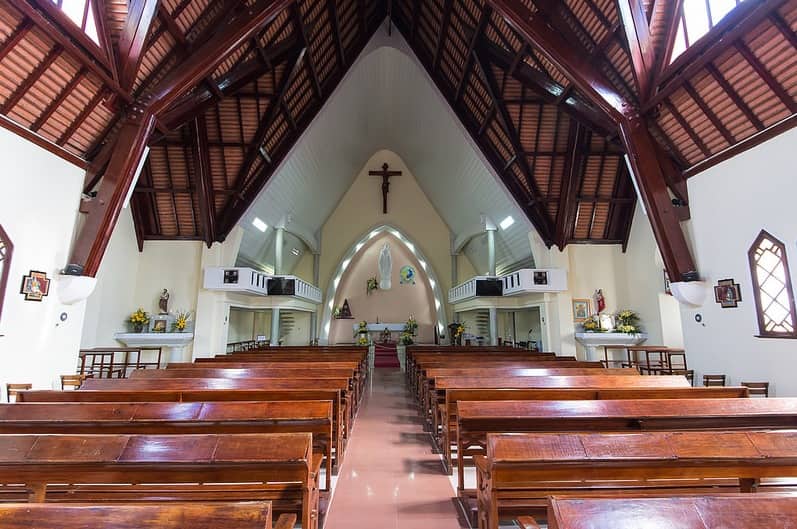 Someone called the Church of St. Vincent is the chapel of the Soeurs. Someone called Mai Anh Church because previously there are many cherry blossoms. Since 1943, this church was rebuilt with a unique form of architecture than other churches in Dalat. Although the church has no bell tower on the top, the vestibule is designed as a balanced triangle, the front is decorated with small dome door. The main door has two steps up from two sides. The roof of the church is shaped like the roof of the Thuong, but especially the roof of the roof-protruding for the roof inert. The walls underneath the roof are quite thick and the doors are designed deep into the interior, which adds to the unique beauty of the building. The wall is split with marble to the window sill in the Normandie style. The interior space is illuminated by the colored glass frame, increasing the shimmering appeal to the cathedral. It also houses the statue of Our Lady of Grace, 3m high, weighs 1 ton, and gifts from Indochinese Governor-General Decoux.

In terms of color, since its completion, the Domaine de Marie church used only a dark pink lacquer for the walls. So, in the sunlight, the church seemed to blaze up. Behind the church is an architectural complex designed in a new style with 3 rows of 3 floors of the Sisters of St. Charity of St. Vincent. This is the more majestic, solemn and dignified for the entire church area.

Mai Anh is one of Dalat's newest parishes. The parish is called Mai Anh because the parish church is located on Domaine de Marie hill (Mai Anh hill) on the east side of Dalat city. In particular, the church is not a separate church but the chapel of the Order of the Daughters of Charity, which was built in the 1940s. Although a new parish church, Mai Anh has a veteran history from the 1940s, 1950s. There were only about 100 people from more than 29 families in Hai Ba Trung, Hoang Dieu, Calmette. They were in the custody of the parish priest but were unlucky, few attended Mass at the main shrine and had little contact with the parish priests, except in cases of marriage or burial.

After 1954, the number of new parishioners increased. At this time, Fr. Nguyen Thanh Dien was a chaplain at the People's Hospital. He helped the Dalat parish priests to get more involved with the laity, so the parishioners also began to stick with the parish. In 1967, the number of parishioners increased to 700, and the area became the parish church of St. Paul. With the help of Father Nguyen Van Luan, Duong Ngoc Chau followed Father Dien as a hospital chaplain, the Dalat church priests organized catechism classes or organizations such as Thanh Sinh Cong and Legio Mariae. At the same time, thanks to the enthusiasm of his colleague Joseph Pham Van Dich, the teaching area has progressed more in terms of organization, spirituality close to Chi District Court.

After 1975, the vice-cathedral priests, then Father Do Xuan Que, Father Mai Van Hung Dominic, replaced each other for the ceremony. On March 16, 1976, the Episcopal Court appointed Father Joseph Nguyen Van Han to take charge. On June 29, 1976, Bishop Bartolomeo Nguyen Son Lam raised St. Paul's parish to Mai Anh parish and chose the Assumption Virgin Mary as her patroness, and set up Father Joseph Han as his first parish priest. According to the will of the bishop and agreed by the parish priests, the parish boundary includes La Son Phu Tu, Hai Ba Trung, Hoang Dieu, Tran Binh Trong and the entire Domaine area People in the parish - the church, the house of the house - are still the chapel and some rooms of the Monastery of the Daughters of Charity, continue to contribute to the parish.

After many common efforts of the parish priest and all classes in the parish, especially after the study of the General Letter of the Vietnam Catholic Bishops' Conference (1980), Mai Anh parish had a new face and rose to the religious life. in line with the general direction of the diocese.